I've been doing lots of variations of overnight oats which have been getting some attention on Instagram so I thought I'd share how I make them. 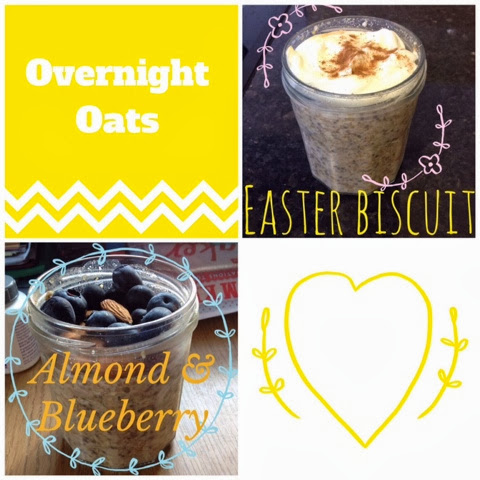 I start with a basic recipe to make a batch of plain oats- this tastes delicious just by itself and I have often just eaten it as is without adding any extras.
Basic Overnight Oats
Makes 1 serving
1 cup of oats
1 tbsp of chia seeds
1 tbsp of ground flaxseeds
2 cups of milk (I like to use almond milk because it tastes really creamy and delicious but I often just use regular milk!)
I just put everything in a jar, put the lid on, give it a shake and pop it in the fridge.
I use an old yellow Rosemary Conley Portion Pot as a cup (it holds 125ml) as I find this is the perfect amount to fill me up and it fits in a jam jar just right!
I do this in the evening then in the morning I can just grab the jar from the fridge and pimp it up if I fancy it (ie. have time/enough hands)!
You don't need to use a jar, I used to just put it in a mug, give it a stir and cover it with a bit of cling film. Or you could use a plastic tub with a lid.... whatever you have to hand basically!
Here are some of the variations I have done by adding extra bits just before I eat: 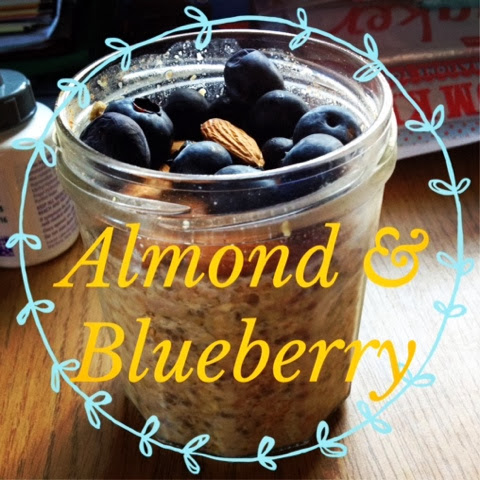 Almond and Blueberry - I add a tbsp of almond butter, and a small handful each of blueberries and almonds. 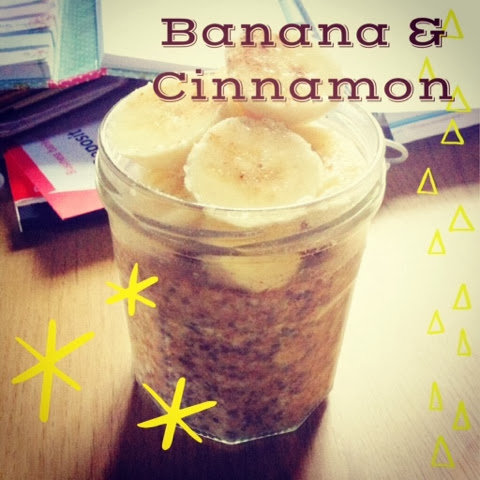 Banana and Cinnamon- I add a tsp of cinnamon and a sliced banana. 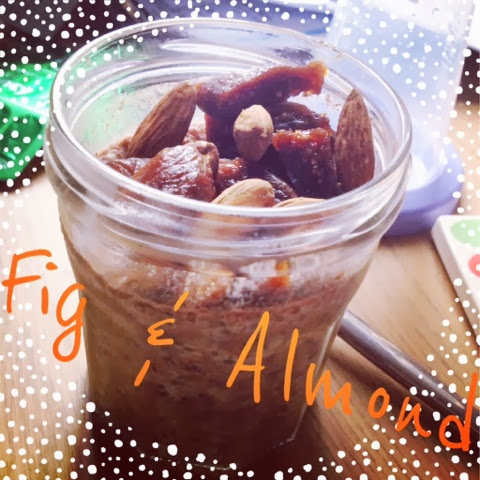 Fig and Almond- I add a tbsp of almond butter, a small handful of almonds and 2 sliced dried figs.
I love the addition of a nut butter, it makes it really creamy and luxurious.
The last few days I have gotten a bit experimental and added extra items to the basic recipe so all the flavours can mingle overnight: 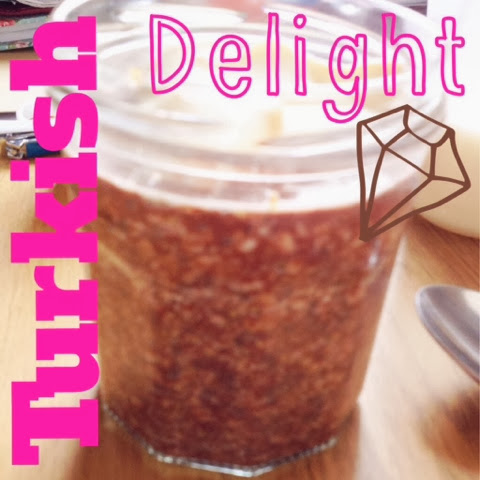 Turkish Delight- I added 2tbsp of drinking chocolate and a tsp of rose water. In the morning I topped it with a little natural yoghurt, I think it would be amazing with a drizzle of rose syrup and a few chopped pistachios as well! 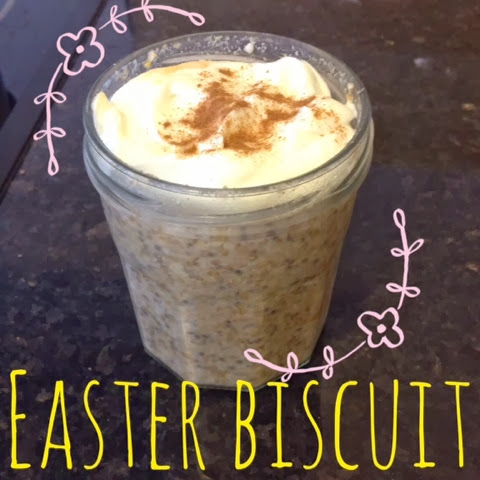 Easter Biscuit- I added a tbsp of cashew nut butter, a tsp of mixed spice and a handful of raisins. In the morning I topped it with a little natural yoghurt and a sprinkling of cinnamon. Adding the dried fruit the night before meant it had time to absorb some of the milk and plump up a bit- delicious!!
For tomorrow I have made some 'Nutella' oats by adding 2 tbsp drinking chocolate and a handful of hazelnuts. I think hazelnut butter would have been a nice addition to this (I would have used it if I had it!) - I hope it tastes as good as I imagine. 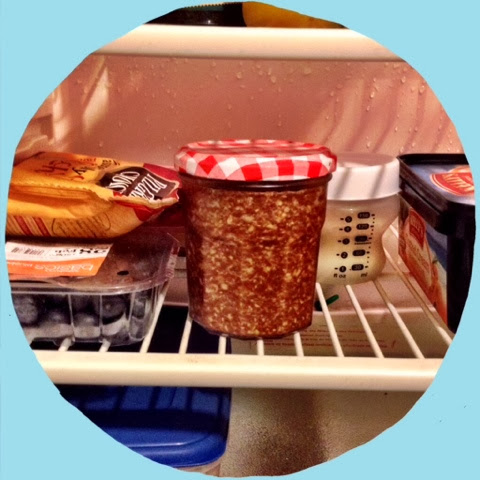 I hope this inspires you to make your own flavour combinations, have you tried anything that you would recommend?
Sarah xx
Posted by milbsy at 11:52 No comments: 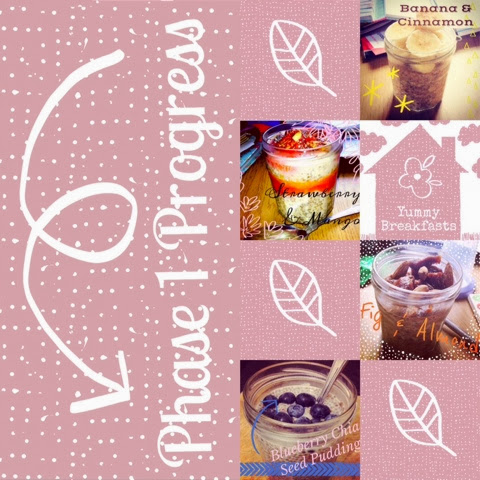 Well the breakfast thing has been going pretty well, there are so many variations you can do with overnight oats that I don't think I'll be getting bored of them anytime soon!!
I also tried a chia seed pudding (from Deliciously Ella) which was very simple to make and tasted really creamy and delicious.
On Saturday I was desperate for something sweet and sugary after being up all night with TrumpyPants, usually I'd have attacked the biscuit tin but I knew I had everything in the cupboard to make the Bannoffee Pie from Ella's app so I got the magimix out and had a go- they were very quick to make and ridiculously sweet and satisfying. I'll definitely be making it again!! 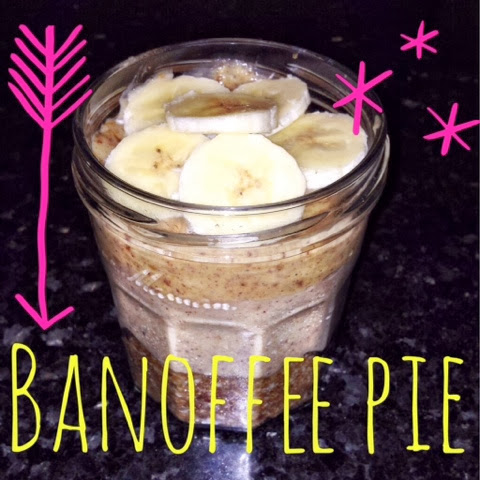 On Sunday my husband made bacon sandwiches, I don't know what it is about the smell of cooking pig flesh but there was no resisting it!!! It tasted amazing but I felt the need to make up for it health wise so I made a fruit smoothie.
And so to phase 2 of Operation Healthy Mummy- have a smoothie every day, including at least 3 green vegetable smoothies a week. I've seen lots of fab recipes that I can't wait to try. I want to start using things like Spirulina, Wheatgrass and Acai powders but I'm going to ask my GP first in case it will have any effects on my breast milk.
Posted by milbsy at 04:35 No comments: 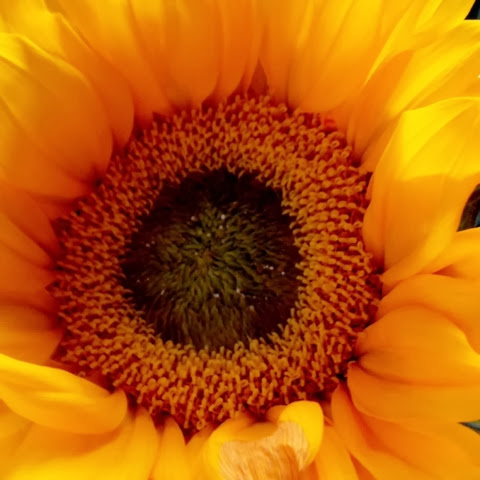 I gave birth 5 weeks ago and the constant breastfeeding and lack of sleep have left me feeling really run down which I'm sure is making me more tired and it's becoming physically noticeable (via dry skin, limp hair, mouth ulcers....) I want to be the best Mum that I can be and right now that means supplying lots of healthy breast milk, luckily the feeding is going really well but I feel I need to do more to look after myself. I've found myself consistently snacking on biscuits and crap that is easy to grab and eat one handed (TrumpyPants does not like being put down), I'm seriously depriving my body of nutrition and I'm now starting to feel guilty that this will deprive the boy of all the nutrients he needs to be getting from my milk.

Through Instagram and Pinterest I have come across a number of people who focus on healthy eating and living- lots of it gluten/dairy/meat free but packed full of nutrition. This got me thinking about what little changes I could make to my diet that I could fit in around breastfeeding.
My main aim is to get to the point where I'm eating nutritious, unprocessed food 5 days a week- I don't want to cut out any food groups but I do want to cut down on processed food. I don't want to 'diet' or count calories or fat but I do hope that being healthier means that I will lose some weight. I came out of my pregnancy 1 stone and 4lb lighter than when I conceived simply through stopping drinking (I drank A LOT) and I have continued losing weight which I think is down to breastfeeding. I am now 2 stone lighter than I was when I got pregnant. This has really helped motivate me to start this journey- I love being able to fit back into clothes I haven't worn for ages!!
I know I won't be able to change my eating habits overnight so I plan to take it one step at a time.

My main aim with this blog is to document my journey through 'Operation Healthy Mummy' but I will also share my love of crafting, pretty things and my life in general.

A filling and super nutritious breakfast

Overnight Oats seem to be everywhere I look at the moment and after coming across them last year via Pinterest and making them a few times it dawned on me that they would be the perfect solution to my current breakfast dilemma - trying to open milk bottles/cereal boxes or spread stuff on to toast one handed! Overnight oats are so easy to prepare and when I get up at stupid o'clock all I have to do is grab them out of the fridge and retreat to my pit.
So, phase 1 of Operation Healthy Mummy: eat a filling and super nutritious breakfast every day. Starting today. 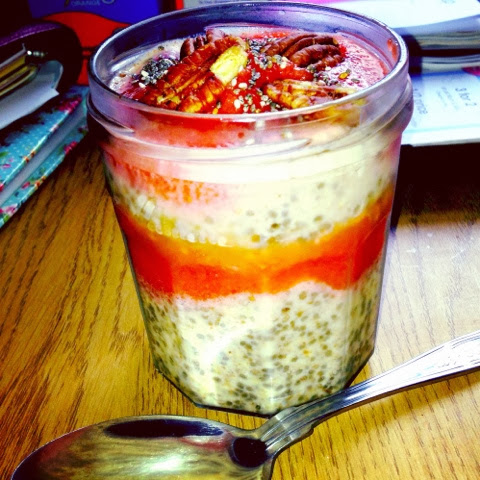 These are my Fruity Chia Oats (oats, chia seeds, almond milk, almond butter, cinnamon and vanilla extract layered with a strawberry, mango and honey purée topped with chia seeds and pecans) and they were absolutely delicious! I downloaded the Deliciously Ella app after coming across her on Instagram and loved the idea of layering the oats with fruit purée as in her recipe for Overnight Strawberry Chia Oats. It's so refreshing and fab for using up small amounts of leftover fruit. I find these keep pretty well so I made 2 lots and have some for tomorrow as well. I'm currently feeling very organised and smug!!!
I've loved reading Ella's blog and find her food philosophy really inspiring, the app is beautiful and the pictures are mouthwatering!
Posted by milbsy at 16:04 No comments:

milbsy
I am the landlady of a small pub in the heart of Devon. I recently gave birth to a gorgeous baby boy and my life currently revolves around breastfeeding and trying to get rid of his wind. I love craft, pretty things and my cat and dream of a handcrafted family home.